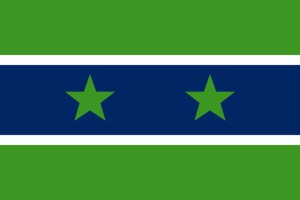 The flag as a whole is in a similar style to the two best American city flags: Chicago and Washington DC, but some aspects are distinctly Atlanta. The green on the outside of the flag is reminiscent of the famous tree canopy on the outskirts of Atlanta. The deep blue harkens back to the Georgia state flag. The two stars represent the two railroads that Atlanta was built upon. The stars have five points as a call-back to the historic area of the city, which is known as Five Points.