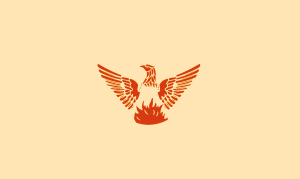 The flag is peach colored, meant to represent Atlanta’s importance as the capital of Georgia, the Peach State. Peach is also a very unique color to have on a flag, which would make Atlanta’s flag instantly recognizable from a distance. The phoenix itself represents Atlanta, as Atlanta’s motto is “Resurgens,” or “Rising Again” in Latin. The design from the phoenix is taken directly from the Atlanta seal. However, I think that the design of the fire could be changed. The thin gold border around the phoenix is there because my intention is that, when the flag is actually being sewn together, the phoenix would be attached to the peach background with golden string.