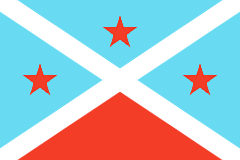 The two white bars represent Atlanta’s establishment at the intersection of two major rail lines. The three stars represent Atlanta’s major institutions: transport, education, and media. The red triangle at the base represents both the Great Atlanta Fire, as well as Atlanta’s roots as a Southern community. The blue background is meant to show Atlanta’s patriotism.